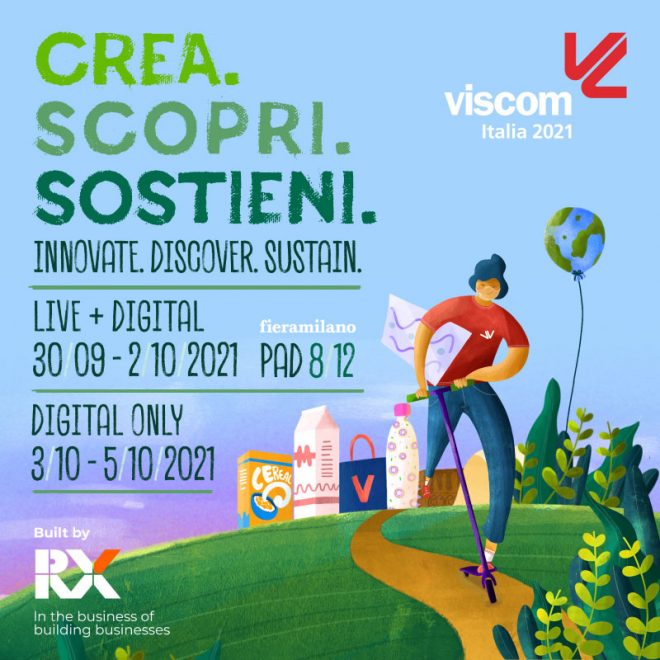 News by Paola Coronel22 September 202122 September 2021
A UNIQUE JOURNEY TO DISCOVER THE LATEST TRENDS IN THE VISUAL COMMUNICATION MARKET, TOGETHER WITH THE LEADING PLAYERS OF THE WORLD LARGEST VISUAL COMMUNITY: AN EXHIBITION AREA, TALKS, WEBINARS AND SPECIAL EVENTS ARE WAITING FOR YOU.
Since thirty years Viscom Italy is the main point of reference for the world of Visual & Communication. Thirty years of history that have told a real technological and cultural revolution. If in the 90s, in fact, communication was essentially a matter for printers and advertising graphic designers, engaged with photolithic, rotogravure printing and decidedly aggressive solvents, today technologies and contents have evolved, becoming first of all sustainable and then improving the graphic rendering and possible fields of application.

Interior design, for example, is considered one of the most interesting areas of development by several Viscom Italy stake holders. Alongside the theme of building, contemporary architecture has added that of communicating: physical branding, way-finding, environmental graphics are basically expressions to describe the need for places, public and private, to be recognizable, to be able to drive people in the most useful way and, in this lapse of time, to be able to express at best their own identities and functions. A voice that aims to be effective, impactful, clear and incisive ... exactly as expected from advertising, which with its rules, solutions and strategies becomes an inestimable wealth of knowledge and experience: what was once advertising graphics, today becomes narrative graphics.

Many of these changes are the result of an incredible technological evolution, that began with the addition of computer control to machines. Some sectors, such as digital printing, have considerably improved resolution, color fidelity and eliminated toxic inks, thus guaranteeing the possibility to move from outdoor signage, which nowadays has become digital, to interior decoration.

We have visited and explored Viscom Italy in past editions with the naive eyes of those who cross the threshold for the first time: the impression was of being in a large creative laboratory where machines, sometimes miniaturized and sometimes gigantic, cut, print, embroider, affect ... Technologies, born from a common matrix, have evolved into an infinite number of applications (and equipments) developed for the plural market needs, which in the last ten years have become increasingly complex and specialized. We proceed by addition or subtraction, for direct processes or subsequent applications and the quantities, materials and dimensions of the final product determine a universe of solutions, which are Viscom Italy heritage.

Visiting Viscom Italy means discovering all these differences, learning about their possibilities and opening new creative horizons. Designers return to dialogue with craftsmen and, discussing about production process, raise the bar of expectations by triggering the mechanism, leading to new innovations. 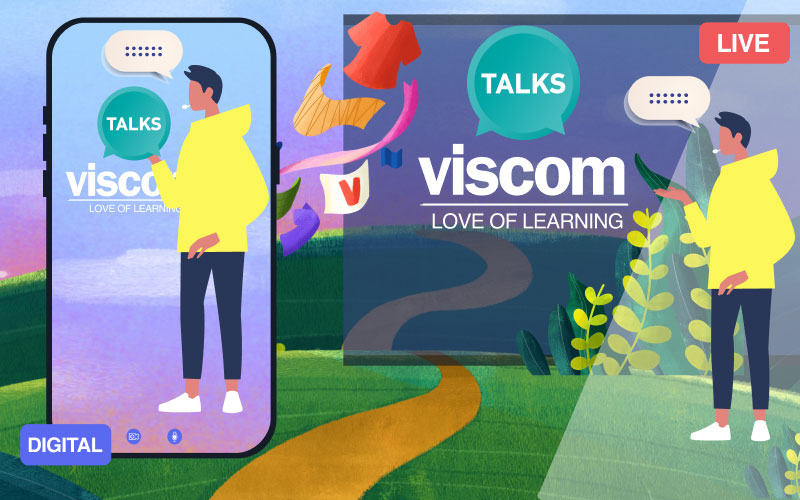 Visual and Communication contain such a universe of knowledge, that Reed Exhibitions Italy, organizer of the event, has decided to present a new edition of Viscom Italy Live + Digital, which will be held in hybrid mode from Sept. 30 to Oct. 2 and will proceed from 3 to 5 October in digital format only. The new digital platform will allow all visitors to preview the technologies present at the fair, create an agenda of appointments with exhibitors, both face-to-face and digitally, and organize participation in the events at the show.
As this year's EXPO in Dubai teaches us, to build the future we need to share ideas ("Connecting minds, to build the future") and, therefore, a full program of meetings and debates will alternate over the three days of the fair and continue in the virtual space of Viscom Italy 2021 Live + Digital until 5 October.
We will talk about delicate topics, such as nudge, the gentle pushes to communication, music, sustainability in various fields from architecture to fashion and in the elaboration and production of packaging, ethics, talent, competence, marketing strategies. and global challenges. Relevant speakers will bring their point of view trying to inspire and involve the present and remote audience, which, thanks to the simultaneous streaming of all the appointments, will allow to expand the audience beyond physical boundaries.

Design Wrapping, whose knowledge of this sector also comes from the experience gained at Viscom Italy, will be, for the first time, media-partner of the event. With a booth at the Milan-Pero Trade Fair (Hall 8) it will celebrate its official launch.

We are ready to take off and waiting to have you on board! 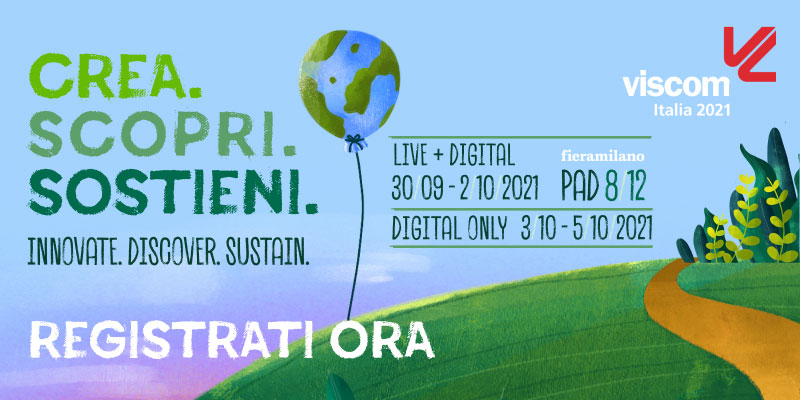 Get your free-ticket for Viscom Italy Live + Digital by clicking on the banner above and following these few simple steps:

- fill in the data and activate the personal profile; click on the section GET YOUR OWN TICKET and enter the invitation code 7427000190

- choose the day of your visit and you receive via email the free pass with QRcode to bring to access the event.

IN ORDER TO MAINTAIN SOCIAL DISTANCING, TICKETS WILL BE AVAILABLE ON-LINE ONLY.